Lighting and using a woodburning stove

If there is a bit too much text and information on this page (and we are stove geeks here and yet have enough awareness to know that not everyone is obsessed with woodburning stoves) then we also have a very much simplified, comic-style, version of how to light a woodburning stove

There is no single right way to light a fire in a woodburning stove - if you have a method that works well then by all means stick with it. I explain below how I light a fire in a woodburning stove. As it is something which I will generally be doing every day what I aim for is an effective and reliable technique that does not take too much time. Having said that lighting a stove can be really enjoyable, a good collective task with the cosy fire to look forward to. You are eventually aiming for a nice hot firebox, with no smoke and good visible flames in it. Once hot the flames in a modern woodburning stove will often produce a lovely mesmeric rolling effect as the gases ignite above the wood and you can see this to some extent in the picture of my stove to the left. My stove is a letterbox style inset stove so is not all that tall - with a tall contemporary freestanding stove you gain even more height to the firebox and so this effect of the flames becomes even better. The way I start a fire in a wood burning stove is as follows: 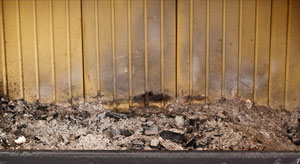 Wood needs heat to burn - this is why the firechamber of many stoves is lined with insulating fire linings or bricks. Wood therefore burns well on a bed of ash: the ash at the base of the stove forms a nice insulating layer which helps to direct the heat upwards into the wood. If the ash builds up so much that it is taking up too much space then remove some, but not all, of it. (you might want to read about what to do with ash from a stove) If there is a grate in the stove then you will want to keep the ashpan empty and poke a few air holes through the ash to the grate so that the fire can get some air from underneath when you light it. With coal the situation is very different and you need to keep clearing the ash in the stove (you might want to read about burning coal in a stove).

As well as heat wood also needs a good supply of oxygen to burn well. So open up the air controls. Many stoves will have a separate air control for the air coming in at the bottom of the stove (usually through the grate if there is one) which is called the 'primary air', and then another for the air coming in near the top of the stove which also is usually employed as an 'airwash' to keep the glass clean. Tertiary air is sometimes allowed in at the back of the firebox through either holes or a slot, and this can often be controlled via the same secondary air control lever or slider. Some stoves have a single combined air control lever. Anyway - open them up. Many air controls will either show a plus or minus symbol or a triangle symbol. Adjust the control to the Plus symbol or to the large end of the triangle symbol.
A flue damper is a rotatable metal plate inside the flue pipe with a little handle that you can turn. If you have a flue damper fitted then open that. Usually the damper is open when the handle is turned to run in the direction of the flue pipe. 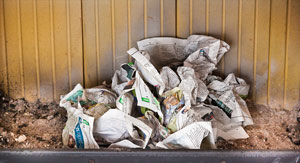 Take some sheets of newspaper and scrunch them up, not too tight or they will not burn well, not too lose or they will burn too quickly. Some bits of cardboard, again lightly scrunched, on top of the newspaper can help too as it burns for longer. Firelighters work well too, but usually paper is free. If paper or firelighters seem like a faff then there is also a handy device called the Firelighter. Like a hairdrier on triple expressos, the Phoenix Firelighter blows hot air into the stove to start it, meaning that no paper is needed at all and you can have the fire going in a couple of minutes. Nice dry softwood makes excellent kindling but remember not to burn treated or painted wood. Split it into small pieces, around 10-20mm in section but there is no need to be very accurate, they should just be small. Dried twigs collected in the winter and dried in the summer also work really well as do dried pine cones. If you only have a harder wood like oak then you may need to split it into smaller pieces or add more cardboard as it will take longer to catch than softwood or a less dense hardwood like ash.
Lay some kindling on top of the newspaper, spreading them out so that they touch each other but still allow gaps for air and flames between each other. Arrange them in such a way that they do not simply flatten the newspaper.
>Add a slightly larger bit of wood on top.

light the newspaper at the bottom and close the door of the stove. Some stoves benefit from the door or ash pan door being cracked slightly open when you are lighting the fire - it may mention this in the manual if that is the case. The fire should spread through the newspaper and the kindling should start to catch shortly after. In around 5 minutes or so you should see that the kindling has caught well and is now burning on its own without the aid of the paper which will have burnt out. Add a couple of logs to the fire making sure that you do not smother or crush the fire when you lay them into the stove.

Once these larger logs have caught fire well - probably in around 10-15 minutes - you should then be able to start to turn the air controls down a bit. Wood generally prefers air from above; the flames you see are mainly from gasses being given by the wood burning above the actual logs and therefore the air is most needed above the wood. So, if there is one, turn the bottom air controller down first, then adjust the burning rate with the top control. If you have a flue damper then this is the time when you may need to adjust that too. Do it gradually and keep an eye on the fire - if it dies right back and you start to see smoke in the firebox then you know you have gone too far or done it too soon. This also depends on how good your chimney is: if the draw is poor then you may not be able to turn the air controls down much at all. The draw from the chimney will generally tend to improve as it warms up.

After around 30-40 minutes the stove should now be burning well. You should have noticed as the stove came up to temperature that it would have started giving out decent heat to the room. Tar and deposit marks in the firebox or on the glass which developed as the fire was first being lit should now start to burn off. You should notice good rolling flames in the firebox and if your stove has a tertiary air supply then you may see little jets of flame around these air openings.

The time to refuel is once the logs have mainly burnt to embers, but before all the visible flames disappear. Add a couple more logs on the fire and open the air controls up again to let them catch. When they are burning well adjust the controls down again in the same way as before. We have a neat little device called the FlammenPilot which will tell you the right time to reload your wood stove - this can potentially save you a serious amount of wood. Aduro stoves have a clever mechanism which you use when you refuel them. Using it turns up the air supply and then gradually closes it down again.
When you open the door of the stove to refuel do so slowly, letting the fire and the chimney get used to the higher volume of air rushing through it. If you just open the door quickly you can end up with a puff of smoke coming into the room as a result. Also make sure that if you have a flue damper that you open this before you open the stove door.

When the fire in the stove has burnt down to embers at the end of the night you can simply let it go out. At this stage you can probably shut the air controls down a little further to help retain more heat in the stove but do not completely shut them. Loading the stove up and then 'turning it down for the night' is not a good idea as it is inefficient, will blacken the window, fill the chimney with tar (increasing your risk of chimney fire), and produce a lot of smoke

If you will only be burning wood then choose a dedicated woodburner if possible as it will probably be designed to be more efficient at burning wood, plus, if there is no grate, then the firebox will be that bit larger.

If you find you have trouble lighting your fire, you can always purchase a Phoenix firelighter. No newspaper or kindling is required and can have your stove roaring away in 2 minutes. The Phoenix Firelighter has revolutionised lighting of solid fuel fires whether it be wood for coal and only costs 1p per fire.

Things not to do

Just added to your wishlist:

My Wishlist
You've just added this product to the cart: